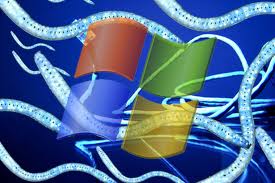 [/caption] A mass-mailing worm has presented itself and spreading quickly. This mass-mailing worm type that has not been seen since 2002. While this worm is persistent and stubborn, it is not particularly harmful, reports PC World. It is being distributed through email attachments as well as network shares. What are worms? A worm is a program that makes copies of itself and can go from system to system without using host files. This is different than viruses, which require the spreading of an infected host file. Worms generally exist inside of other files, such as Word, Excel, and PDF documents. The files are normally transferred via attachments. This worm shows up in email messages, with the subject line “Here you have,” and contains what appears to be an adobe PDF file whiich is actually a link. This link actually takes the victim to a website hosted on the members.multimania.co.uk domain. It then attempts to download a screensaver (.scr) file. Once the victim agrees to install the file, the computer is then infected by the worm, which mails itself to his e-mail contact list. This worm is known to affect Outlook users but it is unknown if it affects other e-mail clients. This worm has been maneuvering a whole lot through corporate environments, bogging down e-mail servers while it replicates and mail itself to the entire address book, and to hard drives and network shared drives. Major companies such as Disney, Proctor and Gamble, Comcast and even NASA are currently battling this worm. The worm had been mostly undetected by anti-virus programs as of Thursday afternoon but now they have begun to add it to their definitions. This malicious screensaver seems to have been taken down by members.multimania.co.uk so the infections should begin to decrease. This worm dates back eight years and with a little social engineering, it produced great results which is a reminder to be watchful of security when opening attachments and working on computers. This information was brought to you by Rocket City Computers www.rocketcitycomputers.com, the #1 mobile and remote Huntsville computer repair service company in Madison County, Alabama.