AVDefender fits into a treacherous branch of malware known as rogue anti-malware and is related to a few similar malwares such as Antivir Solution Pro, AV Security Suite and Security Suite. They have also been called, “scareware,” because it tries to scare the victim into purchasing the software license. AV Defender 2011 use the aid of Trojans to enter the user’s system. The Trojans are downloaded from links on malicious websites promoting fake anti-virus scanners. Once the user click on the link, the Trojan exploits a security loophole in the computer to download and install AVDefender 2011. Once this fake anti-malware software gets installed on the computer, it will load itself as a startup program in Windows which means restarting your computer will not stop it from running because as soon as the computer turns back on and loads Windows, it will automatically run. AV Defender 2011 will then begin running an endless stream of fake virus and malware scans on the computer. These fake scans will generate false reports stating that your computer is dangerously infected with a tremendous number of malware and spyware applications. AVDefender also generates a number of pop ups showing a number of malware and spyware that does not exist. 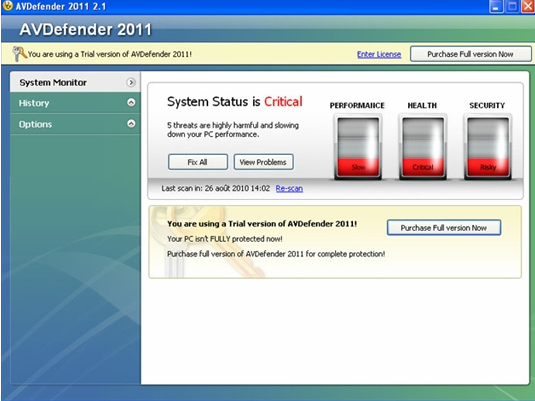 This is a tactic used by several fake anti-virus and scareware applications to get the victim to purchase the so called “full version” of the product and supply the hacker with their credit card information. AV Defender 2011 will urge the user to purchase a license for the full version by claiming that the currently installed ‘trial’ version is not sufficient to clean out the detected ‘threats.’ AVDefender 2011 uses an authentic looking Graphical User Interface (GUI) that looks similar to some of the real well-known anti-virus programs out there, which adds to the illusion that this is a legitimate program. This same tactic is employed by several other copy-cat fake anti-malware programs to trick the user into thinking the program is real and convinces them that they really have all the ‘malware’ in their computers that it said it detected. Nevertheless, the user should keep it in mind at all times that AVDefender 2011 is a fake anti-virus and anti-malware program that cannot—under no circumstances—clean out the computer. Without getting into anything too complicated, we recommend using Malwarebytes to remove AVDefender out of your computer. AVDefender can sometimes prevent any executable programs and task manager to load thus preventing you from stopping the process. You may even have to download Malwarebytes onto a USB drive and log into your computer using safe mode to install it. If all else fails, contact a computer repair services shop and they will remove it for you. Rocket City Computers’ IT Technicians have encountered the AVDefender 2011 fake anti-virus program countless times and although it can be a bit stubborn, our computer repair technicians have removed it out of every computer, every time. Rocket City Computers is a mobile and remote support computer repair company based out of Huntsville, AL, providing computer repair services all across the US and Canada through remote support. Our policy is, if we can’t fix it, we won’t charge you. Our customer reviews for remote and mobile computer repair assistance is excellent. Please visit www.rocketcitycomputers.com and check out our blog for information on new virus, spyware and malware information.